Wherein the army of the Burgravate of Nabstria under General Hieronymous von Rumpfler encounters the forces of the Sanjak of Zenta, commanded by Captain-General Taras Bulbous.

Surprisingly he succeeds in out-scouting his Zentan adversary, and he decides to take up a defensive position on open ground near the village of  Grosse Katzick.

(Below) Rumpfler deploys eight regiments of his regular infantry into two lines, his pair of batteries entrenched and interspersed amongst the front ranks of troops. The right-most portion of his foot will also benefit from being on a hill.

His left wing (below) is anchored on a wood, and is held by one of his regiments of irregulars. 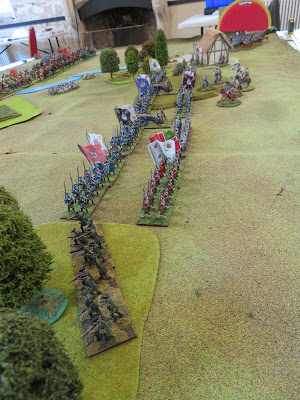 On the right wing (below), he places his remaining infantry regiment in the village. The gap between his main line and the village contains a wood, and this wood he occupies with his other regiment of irregulars. 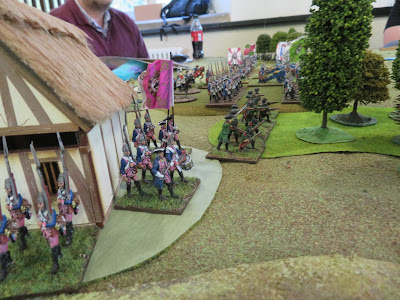 On the extreme right of the Nabstrian line, Rumpfler deploys all three of his regiments of cavalry. The very rightmost, in the position of honour, are the Pfannenstiel hussars. For maximum flexibility, the troops are deployed in columns of march, ready to to leap into action and do whatever it is that Nabstrian cavalry do when they are approached suddenly by the enemy cavalry and realise that they are still in march column. 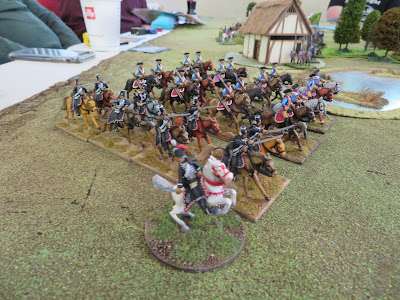 With his flanks well covered, and his centre solidly deployed, Rumpfler approaches the coming battle with a strong measure of confidence. This is exactly the sort of encounter that his long hours playing at games of war with his finely crafted military miniatures have prepared him for. Of course, in a real battle such as this, he has much less scope to ignore the rules or threaten to imprison his adversary if he doesn't let him win. Or so one might think.
Ready for battle, the Burgrave surveys his enemy through his telescope. The Zentans comprise of a horde of troops, impossibly large in number, repellently ripe in stench, and horribly bad with cutlery ...
Posted by Pechlivan at 05:00