'Breakfast?' replies Rall. 'Baaaaaa! It is my favourite activity of the day!'
'Mine too!' says Rupprecht enthusiastically. 'Except for bonking. I'm a great fan of extravagant bonking: after all, in life, you get out what you put in'.
Rupprecht gestures to his guards, and plates and jugs are laid out on a table to the side. Rall is lucky that he is in Bachscuttel and not Fenwick. In Fenwick, of course, no one can handle jugs, unless they fancy a stiff prison sentence.

'So who else will be declaring war on Nabstria?' says the prince, cheerfully. 'I should imagine Fenwick would certainly be at the front of the queue'.
'Also Vulgaria, my lord', replies Rall. 'Mooooo!' he adds.
'Vulgaria?' replies Rupprecht in surprise. 'I thought that Zentans hated Vulgarians and vice versa!'
Rall shrugs. 'You know what they say, my lord: the enema of my enemy is my friend'.
Fecklenburg interjects. 'The enemy of my enemy, I think!'
'What about the enema?' asks Rupprecht.
'I should imagine that comes later, my lord' says Rall.
The prince nods. 'I suppose that would explain why they are enemies'.
'My lord, what is for breakfast?' asks Rall.
'Well', says Rupprecht enthusiastically. 'It's kippers'.
'Moooooo!' expectorates Rall angrily. 'Baaaaaaa!' he thunders. 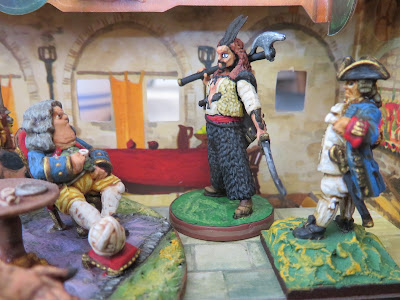 'But kippers are yum!' says Rupprecht with annoyance.
Rall pulls a face. 'No they aren't: I hate them. They are a stupid food for stupid people!'
'They are not stupid!' cries Rupprecht. 'They are yummy yum. And I resent most strongly your implication that, because I think that they are yummy, I am stupid'.
'They are horrid food for horrid people!' continues Rall. 'We shall see if you are so keen on them if I take this fish and whack you around the chops with it!'
'I am Prince of the Palatinate of Saukopf Bachscuttel, and thus I am above being hit in the face by any form of seafood! You wouldn't dare!'
'I would dare. I double dare. I double smoked breakfast fish dare!'
'Hitting me in the face with a kipper wouldn't just be uncouth - it would most certainly probably result in a declaration of war! I shall not allow you to impugn my extraordinary majesty by allowing you to thwack my visage with breakfast consumables!'
'Gentlemen!' cries Fecklenburg, moving to interpose himself between the two.
'O ho!' cries Rall. 'It's breakfast consumables, is it! It's 'possibly, certainly a war' is it! Well, what do think about this then!' He swings a kipper at the King with all his might.
Though porkier than a gluttonous walrus with infinite access to fish and elasticated trousers, the prince is surprisingly agile, especially in the face of acts of physical violence to his person. Dodging the attempted aquatic assault, he steps back and the kipper instead smacks into the side of the head of the person standing next to him: Fecklenburg.
Fecklenburg gasps. He has had to suffer many indignities in his time as Rupprecht's chamberlain, but being assaulted by a fish is the last straw. He turns to Rupprecht.
'You wouldn't let him get away with that!' he rages to the prince.
'Well, truthfully I might', replies Rupprecht.
'But by hitting me with a fish; me, your closest councillor, hasn't he in a sense hit every person in your palatinate in the face with a fish too?'
'It's nothing that I haven't thought about doing myself'.
'But in doing so he has made you look foolish, my lord'.
'Has he?'
'Yes - very, very foolish. And also, not the sort of person that should ever be allowed to be Bishop of Schrote again'.
'I really did love that hat', says Rupprecht wistfully.
'Exceeded only by the quality of the robes' adds Fecklenburg.
Rupprecht nods. 'Well, then, you're right: war it is. I declare war on Zenta, and all its allies! Let that be a lesson to you, you Zentan upstart!'
Rall waves the fish. 'I welcome it, sir! You shall be defeated in short order, you piscine loving pimplehead!'
'Haddock hating half- wit!' retorts Rupprecht.
'Turbot-topped twerp!' cries Rall.
'Bream- brained buffoon!' replies Rupprecht.
'Cod-chopped chump!' adds Fecklenburg, for good measure.
'Fine!', says Rupprecht, finally. 'War it is, Zentan! Now give me back my fish!'

And so begins what will become known as The Yum Kipper War. An armed conflict both ludicrous and terrible - like a muppet version of the Thirty Years War.
Posted by Pechlivan at 14:18