'No! No! No! No! No! This is is completely unacceptable! I must retaliate!'
'Indeed, sire', says Leopold von Fecklenburg, Grand Chamberlain to Prince Rupprecht of the Palatinate of Saukopf-Bachscuttel, 'your lunch was indeed unreasonably small. But I think we should instead focus our efforts on the report from the Zentan ambassador, Ritter von Dweeb'.
Prince Rupprecht has been forced to leave Schloss Tanvaund and return to his capital, Pfeildorff. He is to tour a state of the art plague hospital set up in the town by his chief medical officer, Herr Hans Klenser.
'Dweeb is still alive then?' asks Rupprecht. 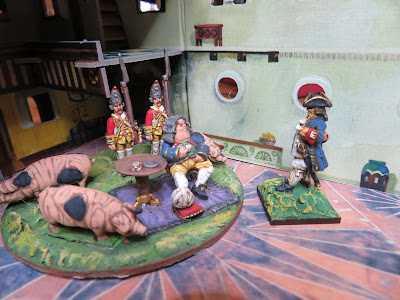 The chamberlain nods. 'It would seem so, my lord. You have to admire that back and breast plate of his. But the intelligence that he has sent us is incendiary! It would seem from this Zentan letter that there is a Fenwickian and Zentan plot to force our nobility to have you replaced, on pain of a renewal of the war against us!'
'Replaced?' Rupprecht seems to consider this. 'Would that mean that I could stay in bed for longer?'
'No my lord, because you wouldn't have a bed - they'd take that. And your throne as well'.
Rupprecht reflects on this. 'And my shoes - would they take those?'
'Almost certainly, sir'.
'What about my cufflinks?'
'My lord, I think that we need to focus on the bigger picture here'.
'But, generally Fecklenburg, you're saying that I wouldn't have to do as much work?'
'But they'd take everything, sire! They'd oppress your people ...'
'A bit of light oppression would do most of them some good ...'
'And strip you of your pigs!'
The prince chokes. 'What! What! Insupportable! This means war! Mobilise the troops! Strip the peasants of their cash! We cannot accept this threat to our royal dignity!'
The chamberlain gestures placatingly. 'It is winter, my lord, and so no war is immediately likely. The threat, I think, will emerge as spring arrives and the campaigning season starts. And anyway, too precipitous a war against Fenwick would be dangerous without allies. We need time to prepare. We need time to develop our stratagems'.
Rupprecht scowls, looking under his throne and then checking his pockets. 'And where will we find these cunning stratagems, Fecklenburg?' 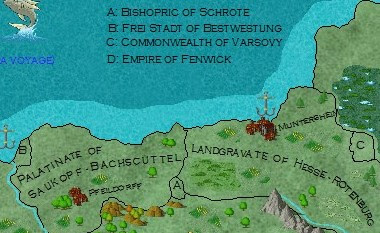 There is a long silence. It is clear that, wherever these clever ideas are to be found, it is unlikely to be anywhere in the immediate vicinity of the prince. Then, Fecklenburg snaps his fingers.
'I've had a thought, my lord! George of Fenwick is to be crowned King of Gelderland in the cathedral in the Bishopric of Schrote!'
Rupprecht nods. 'Didn't I used to be the bishop of Schrote?' he asks sadly.
'Indeed, sir', says Fecklenburg, 'until you were so cruelly stripped of the position in the wake of the latest war'.
'Yes', says Rupprecht sadly. 'I loved that hat'.
'It was so very tall and red', agrees the chamberlain.
Rupprecht sighs. 'Yes, and as a bishop, I was allowed to do all of those naughty things'.
The chamberlain chews his lip. 'I don't think, strictly, that you were allowed to do them, sire: I just think that, as a bishop, you got away with them. Anyway, my lord, a counter-plan is forming in my mind! There might be something that we could do whilst George is in Schrote for the coronation - he would be practically on our borders, and be protected by only a limited bodyguard. We'd need the cooperation, I suspect, of the new bishop of Schrote. We'd have to blackmail or bribe him - probably both, given that he's a bishop'.
Rupprecht nods. 'Have we got anything on him that we can use for blackmail?'
'He's a catholic bishop, sire - it's just a matter of digging hard enough. Hmmm, it just so happens that I play bridge with a Jesuit inquisitor. Let me see what I can rustle up ...'